This train of thought attempts to wrestle with how we arrive at precision with a mode of expression that is inherently imprecise. And what precision could possibly mean in this context.

When we work with coding languages, our view of human language and interaction can become skewed. We sometimes believe that the qualities of a constructed language can be transferred to, and enforced within, an organic language. At the point where social interaction and computing models touch, languages of different kinds meet and intermingle to form unexpected combinations. Can we use language in the manner of Lewis Carroll’s Humpty Dumpty? And when we try to use it in this way, what happens?

“I don’t know what you mean by ‘glory,'” Alice said.
Humpty Dumpty smiled contemptuously. “Of course you don’t – till I tell you. I meant ‘there’s a nice knock-down argument for you!'”
“But ‘glory’ doesn’t mean ‘a nice knock-down argument,'” Alice objected.
“When I use a word,” Humpty Dumpty said in a rather a scornful tone, “it means just what I choose it to mean – neither more nor less.”
“The question is,” said Alice, “whether you can make words mean so many different things.”
“The question is,” said Humpty Dumpty, “which is to be master – that’s all.”
Alice was too much puzzled to say anything, so after a minute Humpty Dumpty began again.
“They’ve a temper, some of them – particularly verbs, they’re the proudest – adjectives you can do anything with, but not verbs – however, I can manage the whole lot! Impenetrability! That’s what I say!”

As we read and write into the Network, we often look at how this activity leads to the fulfillment of our needs, wants and desires. The gestures we make in this direction are scraped up, processed through our identity and fed back to us around the edges of our viewport. The person is defined by the role of the consumer, life is limited to the transactions that will cause the state of the world to be re-organized such that it quenches our desires.

We can imagine there might be an intention economy, some way for us to write a requirements document for whatever it is that we want. This document would then be published to the Network and vendors would surface at exactly the right moment with exactly the right product or service.  The primary benefit seems to be that we wouldn’t get sales offers that are completely inappropriate. Theoretically, we would see a lot less advertising, and the ads we do see should be a good match for our intentions. However advertising is only minimally about making the offer, it’s primarily about the production of desire. In this prospective scenario of intentions, the roles of salesmanship (the power to close the sale) and marketing (the power to create desire in the consumer) only change slightly. 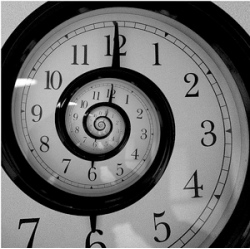 This idea of unequivocally expressing an intention assumes a great deal of exactitude. When do we exactly that we arrive at our true intention? Is it right away, or is there a journey to get there?  When we express our intention the first time, how close are we to the mark? Do we trace the path of a spiral moving round and round toward the center of the target? Is there a static version of our intentions (our desires) that lives outside of time and is awaiting a perfect invocation through language? Or are both language and desire shifting and fluid within the dynamics of the flow of time? Perhaps it’s more like learning to dance to the music of time.

As I visited the Asian Art Museum in San Francisco to see the Emerald Cities exhibition, it occurred to me that the Jakata Tales depicted in so much of the art of Siam and Burma got at the same question. These tales depict the previous lives of the Buddha—his lives prior to being born for the last time to become the Buddha. 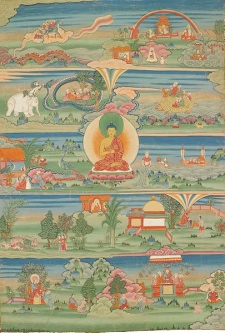 The Buddha became the Buddha after iterating through hundreds of lives. Perfection doesn’t come with a single try, nor is it the meticulous re-enactment of a pre-existing template. Can we expect to easily toss off perfect expressions of our desire? Are there unequivocal formulas we can deploy to place a standing order to fill the holes we perceive in our lives?

From a commercial perspective, advertising exists to align our desires with the set of products and services that have already been manufactured and are ready for sale. Dreams and desires for the most part are pre-fabricated and ready for occupancy. Industrial modes of production flatten desire into the kinds of shapes that can roll off an assembly line. When we advocate changing the polarity from what the vendors want to what we want, we find ourselves in the position of customers for the 1909 Model T— we can have the car painted any color we like, as long as it’s black.

How is it that when I use a word, it doesn’t mean exactly what I intend it to— neither more nor less? Where does the extra meaning come from? It’s as though when I deploy words out into the world, they’re only outlines that are waiting to be colored in by the listener. Meaning emerges through the overlapping follow clouds of a series of directed social graphs, as the words travel from node to node, their context, the world of their context changes. The set of possible connections expands and contracts, new avenues flash into view and fade away as the words travel on. It’s like following the stories of the characters of a road movie instead of those of the towns they pass through.

Denise Levertov wrote a poem about the activity of writing contrasted with the activity of reading a poem. Imagine these two moments of a poem as it travels through the world, connecting with the poet from the inside out and the outside in:

When a poem has come to me,
almost complete as it makes its way
into daylight, out through arm, hand, pen
onto page; or needing
draft after draft, the increments
of change toward itself, what’s missing
brought to it, grafted
into it, trammels of excess
peeled away till it can breathe
and leave me—

then I feel awe at being
chosen for the task
again; and delight, and the strange and familiar
sense of destiny.

But when I read or hear
a perfect poem, brought into being
by someone else, someone perhaps
I’ve never heard of before—a poem
brings me pristine visions, music
beyond what I thought I could hear,
a stirring, a leaping
of new anguish, of new hope, a poem
trembling with its own
vital power—

then I’m caught up beyond
that isolate awe, that narrow delight,
into what singers must feel in a great choir,
each with humility and zest partaking
of harmonies they combine to make,
waves and ripples of music’s ocean
who hush to listen when the aria
arches above them in halcyon stillness.